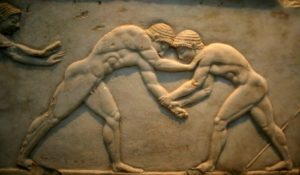 Wrestling for jiu jitsu is considered to be one of the strongest assets you can have in the sport. As jiu jitsu athletes we need to recognize the importance of having a well rounded wrestling game. Today, there are many athletes who have shined on the highest stages because of their supreme wrestling ability. Josh Hinger, Garry Tonon, Yuri Simoes, Rustam Chsiev, and recently Nick Rodriguez are just a few athletes that have excelled in the sport of grappling because of their knowledge in wrestling.

One of the things that I hate to see is the comparisons between wrestling and jiu jitsu, which one is better? Which is more effective in a fight? We should have a deep respect for the sport of wrestling as grapplers, you know why? Because a division 1 collegiate wrestler can walk into any jiu jitsu academy and give any belt level from white to black a good fight. It’s a sport that has been around since man first walked this earth. There is documented evidence of cave drawings dating back to 3,000 B.C. of our ancestors wrestling. Ancient Indian texts talk about the sport of wrestling, the Greeks, romans, Egyptians, Turks, Babylonians, sub-Saharan African cultures all have a long history with the sport of wrestling and there is even mention of wrestling in the Bible, and Quran. We all know as practitioners of the sport that the hardest opponents we face are always wrestlers, regardless of jiu jitsu knowledge.

A wrestler with jiu jitsu knowledge is a scary sight, the same goes for a jiu jitsu athlete with adequate wrestling. The purpose of this article is to not say that one sport is better than the other, but to make sure that we understand not only as students of jiu jitsu but of the art of grappling that wrestling is important. It’s been important since the beginning of civilization, so keep the tradition alive and get to wrestling practice ASAP!