GUERREIRAS PART 4: FROM CURIOUS TO NERVOUS TO ADDICTED

Home/Uncategorized/GUERREIRAS PART 4: FROM CURIOUS TO NERVOUS TO ADDICTED

GUERREIRAS PART 4: FROM CURIOUS TO NERVOUS TO ADDICTED 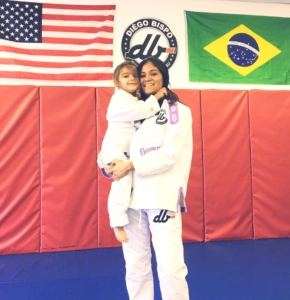 Looking back, it’s easy now for Merced Mercado to reflect on her once-held curiosity. The unknown world of ground-based martial arts that we know as Brazilian Jiu Jitsu, had peaked her interest. Further still the voice of a peer, her classmate, friend, and regular practitioner of the combative art would share stories and details from training, fueling Merced with wonder. Yet, nervous apprehension presented itself as a seemingly insurmountable wall impeding her from stepping into discovery.

Then one day a ladder over the wall was lowered. Her friend exclaimed how the BJJ gym had relocated and was now essentially a stones-throw-a-way. Merced took this as a sign, swallowing it as a pill of courage. It was time to try something new and so she mustered into her first class. 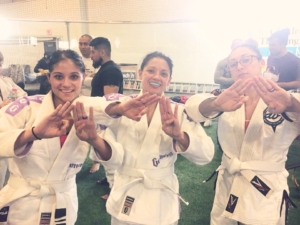 Less than two years later, her belt neatly knotted and reflecting her rank in blue, she is now in love with the sport. Unsurprisingly, her recognition that, “You need to be mentally focused and truly apply yourself…” has served her well. As a former high-school student athlete negotiating the demands of track and field, soccer, and lacrosse she learned early on that no matter what sport you play, “You have to train hard, practice consistently, and come in with your game face.”

Perhaps it is the grit and determination garnered from these past competitive disciplines that fuels her goal to constantly improve in her Jiu-Jitsu training. Or maybe this drive stems from her military duty and devotion to service, while defending our country in the US Navy. More importantly however, is the fact that no matter the root, her efforts aimed at always trying to improve and apply lessons learned is a formula for success not only in her BJJ, but also in life. 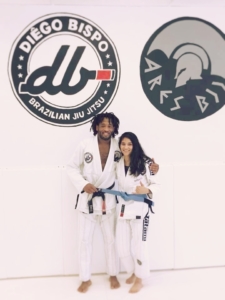 Earning your Blue Belt in BJJ is a key milestone in any practitioner’s journey. When your professor fastens the brightly colored belt around your Gi, after stripping away your previous rank (now devoid of any apparent value), all your hard work, sweat, pain, grinding, and practice are outwardly captured in a newfound position in life. Although this feeling is simply anecdotal the experience is often equally shared and revered. Rightly so, standing before her professor as he produced the coveted new belt, Merced holds this as one of her greatest accomplishments.

As glorifying as it can be to receive the award and recognition of a new rank, there is also an unfortunate loss of participation after this point. The satisfaction of earning a position further up the line in the grappling food chain is sometimes translated into complacency and replaces the former hunger to progress. Conversely, Merced found the biggest challenge to be juggling time demands between work responsibilities and a healthy family life, while fitting in her desire to train as much as possible.

To supplement her fix, when her weekly planner is lacking blocks denoted “BJJ” and time on the mat becomes sparse, she is an avid proponent for utilizing YouTube. Furthermore, to others experiencing the same challenge of being responsible parents, employees, and contributing members of society Merced shares the best advice she has been given, “Don’t ever stop going!” 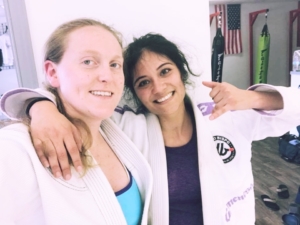 For the women and others who have yet to start ‘going’ or those who are confronted by their own personal wall she recommends, “If you’re nervous, I would highly suggest attending DBA’s Tuesday and Thursday Women’s Only Class. When I first started this wasn’t an option, but now the class is blooming every day.” Training with other women has afforded her more than a competitive outlet to explore. “I love the moral support we have for each other regardless of our age, personal status, or amount of experience.”

Weighing in at a lean one hundred and fifteen pounds, sometimes it can be difficult to find an appropriate training partner. However, Merced maintains the attitude, “At the end of the day in a real life or death situation, size doesn’t matter!” Despite the challenge of training and rolling with larger opponents, she uses this adversity to feed her life philosophy to, “Find success in your failure.”

Tackling a new challenge like Jiu-Jitsu doesn’t have to be a sole endeavor either. Merced remembers the comfort in having her friend as her training partner in the beginning. A familiar face and shared experience helped to displace the expected, but unwanted nervousness and hesitation that often halts action before a step is taken. You might encourage someone else and enjoy inviting a friend to join with you. 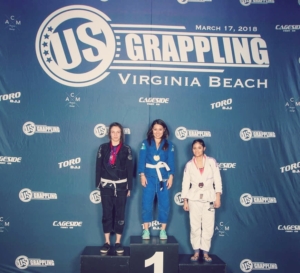 Lastly, Merced makes it a point to highlight the simple idea of enjoying the process and learning along the way. These days she takes pleasure in squaring off with an opponent waiting for the command, “Combat!” Spending her time diligently preparing every day at the gym, attending open mat, and finding new training partners to roll with keeps her sharp. Come game day, outside of crushing the strategy of her opponent, goal number one remains, “Have fun!”