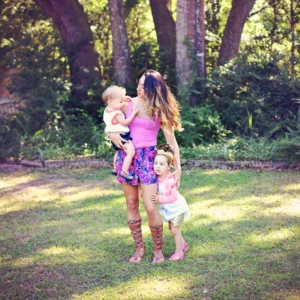 Being a parent is no easy feat. Ultimately, we want our kids to experience the best, behave the best, and turn out the best. Consequently, we set out to find or create an environment of opportunity and learning that will hopefully lend itself to establishing the prior. We utilize sports, extracurricular activities, family adventures, schooling, and friendships to harness character, build grit, teach patience, and instill resilience. 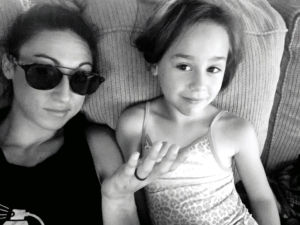 This is how Lindsay Asbury came to Diego Bispo Academy, aspiring to give her daughter the skill set to protect herself. “My daughter is a social butterfly and way too trusting of people, so I wanted her to know how to protect herself, if needed.” What Lindsay hadn’t considered, was delving into the ground-based martial art of BJJ herself.

The invitation to join had been extended multiple times. Yet it was a pair of Gi pants flying through the air and into her lap, paired with a playful command to “Get on the mat!” that opened the door to her Jiu Jitsu journey.

Most people would have rejected such goading. However, Lindsay lives by the creed, “La morte mi trovera vivo.” Inscribed on the nape of her neck, the Italian saying reads: “Death will find me alive.” Her philosophy involves taking full advantage of the gift of life. “When death comes knocking, he’ll have to come find me because I’ll be off on an adventure, and when he does, there will be no regrets.” 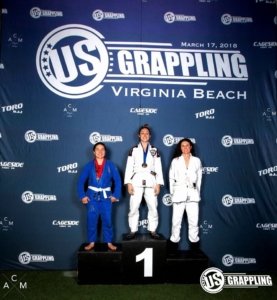 This, live-life-to-the-fullest attitude, paired with the motivation to serve as a role model for her daughter propelled her into DBA’s women only BJJ class. Only eight classes later, she found herself in her first competition.

Never intending to compete and beyond any glory a ribbon-suspended colored medallion could bring, it was stepping outside of her comfort zone while taking on a new sport in her thirties, that brought her the greatest significance.

As a former competitive gymnast having a mindset oriented toward achieving perfection, Lindsay quickly grasped the basic techniques and foundational positions. Though more importantly, and universally adoptable, was the understanding that she gained from her former athletic endeavors, you need to focus on the process. “Jiu-jitsu is all about the process.”

For her the process involves setting lots of small goals. When she identifies an area that needs work, she focuses on attacking that one area, patiently and consistently. “I know my guard game needs work, so I am currently practicing one guard style I can strengthen. Once I’ve grasped it and feel comfortable, I’ll pursue a new one.” 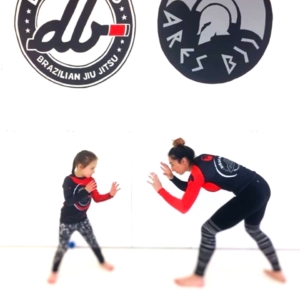 To further aid in her ability to absorb and apply what she is learning, Lindsay attributes her success to simply asking questions. “I ask a lot of questions! I’m never shy about requesting to see a technique again, and I always try to roll with higher-ranking teammates. If I’m getting smashed, great, then I know where I need to improve. Nine times out of ten, I receive tips from the upper belts on how to improve after the roll is over.”

Nevertheless, one of her biggest challenges is remembering that it’s okay to make mistakes. Like the rest of us, Lindsay finds that too often it’s so easy to beat ourselves up mentally and become frustrated when progress isn’t at break-neck speed. To counter this Lindsay practices actively reminding herself to look for the lesson in her mistakes or losses. Simply asking questions and trying to make corrections in future rolls, is always more beneficial than focusing on faults. 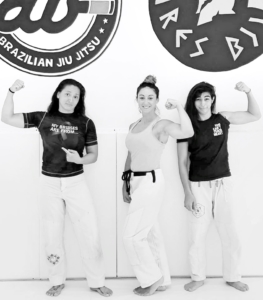 Her continuous humility and attitude toward being effective over being correct, is constantly reinforced in her approach to training. “Your teammates are your best resources for improvement. I always go to my teammates and coaches I trust to ask if a technique is worth learning.  Most of the time they’re able to walk me through things and even give me insight to make adjustments or improvements that make a world of difference.”

As the mom of a daughter that trains and competes, and also a competitor herself, sometimes in spite of best efforts, doubts arise. Lindsay reiterates wisdom garnered from fellow seasoned BJJ parents, “Trust in the process!” a mantra she now focuses on when she finds herself listing toward frustration.

Having a community of other parents, teammates, and especially women has proven beneficial for Lindsay on the mats, and off. “I’ve never been a girl’s girl or part of a large group of women, even as a gymnast it’s a very individual sport unless you’re competing at the collegiate or Olympic level, so I’ve enjoyed the camaraderie with my DBA ladies.” 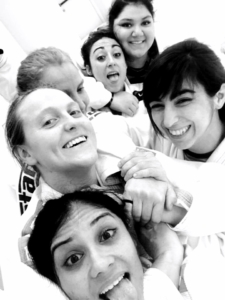 She jokes (sort of) that the best thing about training with other women is that they’re generally light and easy to throw, plus they usually smell better than training with the men. In all seriousness though, she touts with pride how she has never had a bad experience with a training partner at DBA. Even the men!

“I’m part of a women’s only BJJ group online and I see a lot of complaints about how rolling with men is so awful, dangerous, etc… I have never had that issue, if anything, the exact opposite.”

Conversely, she reflects on the fact that often men bring the intensity down too low. “I know I’ll regret saying this, but sometimes the guys are too soft. I appreciate that they are not trying to smash me to death, but I also like to feel challenged. If I can tell you’re being extra gentle it’s a little offensive. I’m tough too, make me work for it!” You heard it fellas, respect your partners and give them your best. We all want to improve and need challenge to overcome in order to move forward.

When Lindsay first started out she recalls her hesitation to try Jiu-Jitsu, understandably due to personal space issues with such a close-contact sport. Nonetheless, she recognized that the only way to overcome an obstacle like that is through trust. “The family atmosphere at DBA made me feel comfortable to step on the mat, and the support of my teammates is what makes me comfortable at competition.”

For women who are considering giving BJJ a try but are too nervous or others who have resigned to an impression that they are not capable of doing such activities, Lindsay offers: “You lose nothing in trying and you have everything to gain! Fitness, friends, family… Confidence. I could go on. Yes there’s sweat, blood, bumps, bruises, and occasional bad smells (haha), but none of that matters on that mat. It’s all about getting better together.”

Together – building relationship, attacking challenge, and instilling the warrior spirit. As a warrior mom, this is what inspires and fuels motivation in Lindsay the most. “Now, while I still enjoy making my daughter proud, I love being at competitions with my team. I always stay until every last person is done, enjoying the competitive atmosphere and how we all support each other throughout the day.”

Consistent support from her BJJ family and their belief in her as a teammate and a competitor motivates her to return to class, every day. In the words of Robyn Benincasa, “You don’t inspire your teammates by showing them how amazing you are, you inspire them by showing them how amazing they are.” This is the mindset embodied by everyone at DBA; we all bring out the best in each other on the mat. 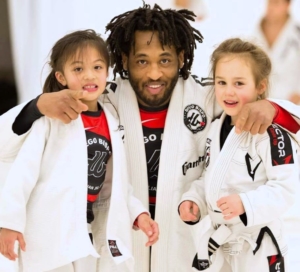 It seems that Lindsay has found an environment of both opportunity and learning at DBA that is not only helping her child become her best, but a community that is bringing out the best in her as well!