GUERREIRAS PART 3: THE PATH TO RECOVERY

Home/Uncategorized/GUERREIRAS PART 3: THE PATH TO RECOVERY

GUERREIRAS PART 3: THE PATH TO RECOVERY 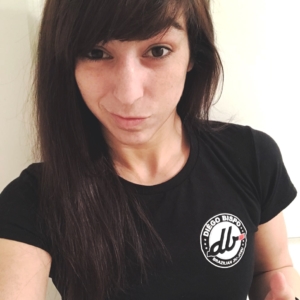 A stomach full of butterflies, the nervous energy associated with anticipation is commonplace in first endeavors. We have all experienced these newbie jitters in some form of uneasiness or terse anxiety. And so I imagine in the beginning, when Kaitlin Wonder stepped onto the mat, her classmates were thinking they had an idea of what she was going through. But what they didn’t know was why she was there.

“I got into Brazilian Jiu Jitsu specifically to learn how to protect myself. I am a survivor of sexual assault and my counselor suggested self-defense as a path to recovery.” Initially, a friend had mentioned seeing a poster advertising a Jiu Jitsu school. Upon further inspection, Kaitlin recognized the combative art as a form of grappling.

Sandwiched between an older and younger brother, both of who were competitive wrestlers, and having a passionate and skilled judoka for a father, Kaitlin found comfort in what appeared familiar. However, she quickly found it to be more difficult than anticipated. At first she was solely paired with another female or teenage boys. When it came time to train with male partners a few months later, she struggled. 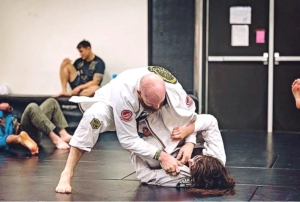 “My teammates were great, but certain moves and positions would trigger panic attacks or flashbacks. There was a lot of trial and error, but BJJ ended up being somewhat like prolonged exposure therapy. I would work to stay in uncomfortable positions longer, with teammates I trusted. As my confidence grew, I became more comfortable. If I knew I may be more prone to anxiety due to stress, lack of sleep, or other life stressors, I learned to be picky with who I trained with on ‘bad’ days.” 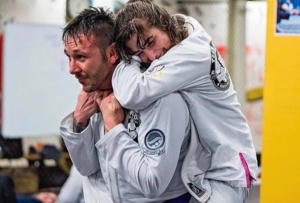 In essence, BJJ helped Kaitlin learn to train through her panic attacks. Although they still happen occasionally, early recognition helps to bring one under control. “When I feel the panic attack start, I grab a teammate who I trust and I flow roll through it.” Considering this tremendous courage, it’s no surprise that Kaitlin found solace in the advice, “Get comfortable with being uncomfortable. The more you can learn to be comfortable in the uncomfortable, the more you can do.”

Perhaps even more telling is the philosophy she lives her life by, “Great things never come from comfort zones!” This iron mindset and purposed resolve is what guides her to focus on attacking the chinks in her armor. Putting herself in compromised positions on the mat and working diligently to recover to a position of advantage facilitates her continued growth.

Nevertheless, as often experienced by people living life, obligations, responsibilities, and competing priorities drew Kaitlin away from Jiu Jitsu. Yet last year she returned to the mat after a three and half year hiatus. Hoping to merely remember her former technique, her dedication to correcting weaknesses and teaching DBA’s women only class led to her clinching the podium spot right below champion at this year’s IBJJF Masters Worlds competition. 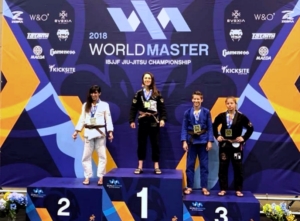 How did she accomplish such a feat? Being surrounded by good people at Diego Bispo Academy, each encouraging each other to excel. “I love to compete, but when I got back in to BJJ, competition wasn’t even a thought. That ship had sailed, I was under the notion that I was way past that stage of life. However, with support from my DBA teammates and instructors I started to compete again and really enjoyed it. I loved pushing myself to work harder and at a higher level!”

Equally enjoyable to Kaitlin, is the BJJ community of like-minded women she has helped foster and grow. “When I first started Jiu Jitsu it was rare to find other females, unless you were competing. At DBA we are so lucky to have a large group of women, it’s truly an advantage.” 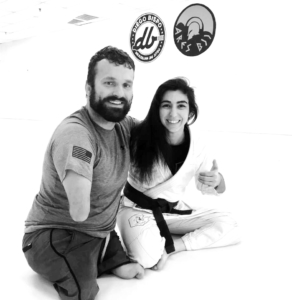 Despite having a good group of ladies to train with Kaitlin also takes advantage of the diverse group of other training partners. “At DBA people may be bigger or stronger than me, but there is a lot of control and respect shown on the mat. I have the opportunity to train with people my size, people my skill level, or a mix of each, which exposes me to more body types and greater challenges.”

However, some of the greatest challenges are not found in training, instead they present themselves outside the gym. Fortunately, Kaitlin’s BJJ training carries over positively into other aspects of her life. “I think BJJ has helped me to have a lot of self confidence at work. Teaching BJJ classes definitely assisted me in overcoming my fear of public speaking. Additionally, I use Jiu Jitsu as self-care for work. Work can be stressful, but being able to train BJJ and recover mentally from stress is incredibly important to me.” 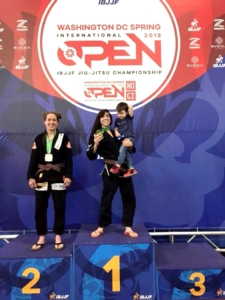 To others thinking about trying their hand, and feet at BJJ Kaitlin offers, “It’s just like swimming, sometimes the best thing to do is just jump in and try it out. It can be awkward at first with all of the new movements and positions, but it gets better. Lean on your classmates, ask questions, and remember to have fun!”