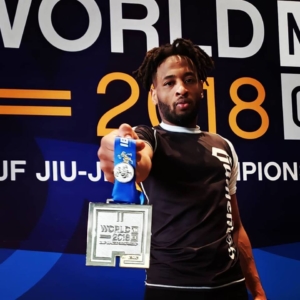 T-minus two. The countdown to 2019 is nearing its final hour. As we move forward hard charging another 365, ready to combat challenges and execute personal goals, continuing to grow as individuals, developing relationships, competing and training diligently, we need to pause. We need to take a breath.

In a moment of reflection, it is encouraging to recognize that the excitement and energy to embrace the New Year is fueled by our victories, the battles won, the lessons learned and adversity overcome in the preceding twelve months.

For Diego Bispo Academy, 2018 proved to be a year of triumph. We are blessed to acknowledge that DBA students and instructors dominated the competitive scene on all levels. But to close out the year simply by citing a list of accolades and displaying a wall of shining metal would neglect to capture the true value of our success. 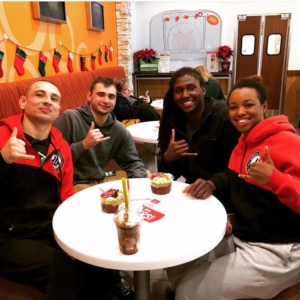 Most recently, six of our team went to California to compete at the World IBJJF Jiu Jitsu No-Gi Championship. Ryan Homer, Ryan Parker, Oleksander Alex Humen, Andreza Morais, Senika Winston, along with Professor Diego Bispo all moved past their first opponent with an arm raised high. Through the fierce competition Professor Diego and student Andreza both secured a silver medal finish, while Alex and Nikki (Senika) joined the ranks of those holding the title, World Champion. 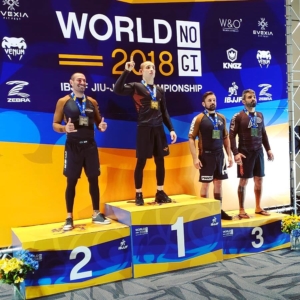 Alex, a DBA brown belt and instructor entered the competition with a cool head and the advice of his professor “Be smart!” After four grueling matches drawing on his affinity for toe holds, knee bars and top pressure, the countless hours of specific drilling, wrestling, and No-Gi preparation proved fruitful as the 30 y/o leaned over to accept gold. 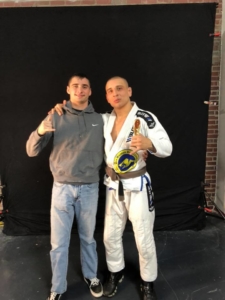 He shares,“When you compete with legends of our sport, it makes you feel super motivated and proud. But to receive support from my wife Viktoria and my daughters, friends, students and teammates was the best part of this journey to the top.” 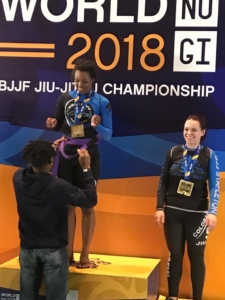 For Nikki, the taste of victory was further sweetened during the podium ceremony, as she tried to process the color purple being tied around her waist. With only two short years of BJJ practice, her discipline and dedication are paying dividends. When it came time to prepare for No-Gi Worlds, Nikki applied herself to a committed regimen, routinely taking on 2-3 classes a day.

“I went to as many training classes as I could. I made sure that I exhausted myself and rolled as much as possible, no matter how tired or drained I was that day.”

Competing in an arena on a world level requires that you be placed in opposition with the absolute best out there. To maintain focus and keep calm on the day of competition Nikki had to zone out everything going on around her and pour her attention into herself and what she came to do. “There was so much talent there, that focusing on anything else would have taken me out of my game.” 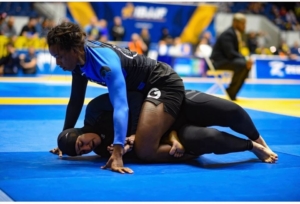 Believing in herself, her abilities, and trusting in her training each played an integral role in that awareness. The understanding and recognition of when and how to apply her competition tactics are a direct reflection of consistent training and high-level, quality coaching.

Although the No-Gi scene has been trendily hyper-focused on the “Leg locker game,” perhaps due to the past success of Craig Jones, Nikki set her mind on doing what she does best and refused to adopt a different approach to her BJJ. Instead of deviating from her Jiu Jitsu style, the high level-competition afforded her the opportunity to learn the value of believing in, listening to, and trusting her professor.

“It really does make a difference who is coaching you and the bond you have with that person. Out of every person talking and yelling, the only voice I heard was Professor Diego’s!” 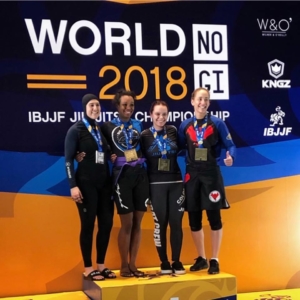 Although one would assume that at this level of competition the athletes are primed and in optimal condition to battle, Nikki had some challenges to overcome. “I had a problem adjusting to altitude. I didn’t realize I would have such a hard time breathing. Thankfully we trained there a couple of days prior, so my lungs had a chance to adjust. Having asthma, I really needed my lungs to be good.”

Exacerbating the situation, Nikki injured her right arm one week before her first match. Being able to overcome these setbacks and still rise to the occasion was the greatest gain for her personally. “My favorite part of this journey was learning to understand a new level of capability. To experience such adversity and come out on top proved to me that no matter what we are facing we can get through it.”

Nikki closes out the 2018 season by first thanking God, and then recognizing the importance, impact, and value of her professor and teammates at Diego Bispo Academy. “I have to say I most attribute my success to Diego and his academy. I literally see myself becoming a better person all around because of Jiu Jitsu and it wouldn’t be possible without Diego. I want to say thank you to my teammates for believing in me, cheering for me, being supportive, and being badass training partners. I love you guys!”

Likewise Alex acknowledges his accomplishment stems from a healthy relationship with his professor, Diego Bispo, his students, teammates from DBA, and equally his family. To each of them he offers, “I would like to say Thank You to all of you for being great training partners and supporters! Without you I couldn’t have done this!”

Although this year has produced innumerous achievements for students of Diego Bispo Academy, including multiple world champions, it is clear that what is most appreciated and valued is the community of quality people. 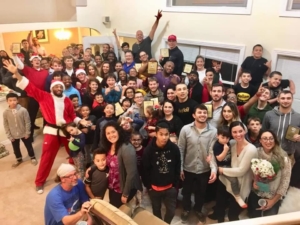 The time and attention Professor Diego and the other instructors sow into their students while holding each other accountable, working hard day in and day out, suffering together, sharing, helping each other, and doing life together is fostering men, women and children of high caliber and skill. People who support one another. A family of confident, capable, and considerate warriors.

Want to be part of this family of beasts? Stop by the gym! We have classes for ages 3 y/o through adult, 7 days a week! See you on the mat! OSS!